The NAOS team exploring the land of the fjords 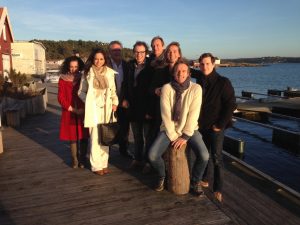 -Fredrikstad is the fifth largest city in Norway, and the northernmost destination throughout our NAOS visits. In par with the rest of the country, Fredrikstad was not a traditional emigrating destination until the last few decades, when Norway has received its fair share of foreign manual labour workers and asylum seekers. Currently, 16% of the people living in Fredrikstad are either immigrants or children of immigrants.

-The NAOS partners participating in the study visit were Cyprus and the Netherlands; the emphasized NAOS topics were language, pedagogy, and social psychology. The choice of three topics reflects a good-example reality of course: Norway has one of the most successful, let alone unique educational systems in the world. Two such particularly novel examples which were also often discussed during the visit were: a) the fact that students are not graded until they reach high school! (at 16), and b) the existence of so-called social teachers in schools, teachers especially trained on social psychology and establishing excellent rapport with parents as well as fostering tolerance. The first school we visited was primary and lower-secondary Cicignon. Cicignon highly values differentiation, which was seen both in the ability of teachers to apply the same teaching method yet with different materials, as well as through the existence of an introduction language school within the grounds, where foreign students are allowed to stay for a couple of years before they can progress to one of the schools in their neighborhood. The second school we visited was Kvernhuset higher secondary. It was found to be an exceptional example of an equitable school environment, with continuous help from social teachers and older students to struggling peers. The school is striving to create understanding between all students from within instead of top-down, all opinions are valued and highly encouraged.

The Fredrikstad visit report can be accessed here: