The NAOS partners with the headmaster of Lumion 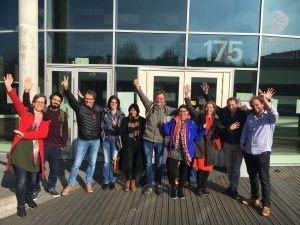 Amsterdam is host to one of the widest variety of ethnicities of any place in the globe. Estimated at 180 different nationalities, citizens of immigrant origin make up nearly half of the city’s population. As a result, the city and people of Amsterdam are thought to be some of the most tolerant and open-minded individuals. As with any large city in the recent past, nonetheless, Amsterdam has its own share of districts where the educational gap between affluent and neglected students remains significant.

The partners visiting Amsterdam were Norway and Portugal, with Pedagogy as the NAOS theme of emphasis. The first school we visited was Lumion, highly characterized by the headmaster’s strong leadership and convictions about education. Lumion invests a lot on their teachers, who go through a progressive evaluation of their skills throughout their years there. They have coaching meetings and clear objectives are laid out on a frequent basis, and utilize a range of digital didactic resources. The school also takes pride in their differentiating and personalized education. Lumion has set forth a very ambitious developmental plan and will soon open a new refined building to accommodate more interested applying students. The second day we visited Rozemarn, a small primary school in one of the most neglected districts within Amsterdam. The school population was almost entirely made up of students with immigrant background. We were touched by the proximity between students and teachers, and the continuous effort to keep the children free of negative environmental impact prevalent in the area. Pedagogy at this school is clearly not simply a matter of teaching them the required subjects, and giving the students a perspective early on in life appears to be of utmost priority here. Rozemarn truly felt like the first home for a large number of these children, and we were overwhelmed by how opinionated and well-articulated these extremely young students were when we got the chance to interview them.