The NAOS team in central Tartu 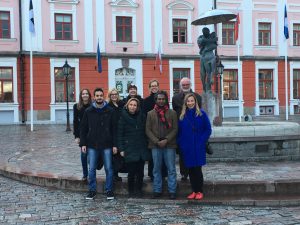 -Tartu is the second largest city in Estonia, yet widely thought to be the “intellectual capital” of the country. Though Tartu has been popular with people immigrating from pre-Soviet states, it has only recently began to receive diverse ethnic groups coming out of Europe. Due to the recency of the break-up of the Soviet Union, Estonia has been able to create a highly decentralized educational system which has often resulted in schools with strong leaders and long-term visions, setting high goals and standards.

-The NAOS partners participating in this study visit were Belgium, Greece, and the Netherlands, and the NAOS overarching theme was pedagogy. Much like Norway, Estonia boasts an impressive record in educational achievement; perhaps most important for the NAOS purposes is the surprisingly small gap in the achievement between poor and affluent students, an achieved equity that was prevalent in both schools we went to. On the first day we visited Tartu Annelinna Gumnaasium, an Estonian-Russian bilingual school that hosts students from Grades 1-12. Impressive collaborative networks have been established throughout the school; all new teachers are assigned a mentor providing them with daily advice, materials and disciplinary dealings. In addition, all teachers belonged to a network according to subject, as well as to a multi-disciplinary diverse network. Co-teaching has been another novel idea introduced, helping both teachers involved to improve and receive direct peer assistance. The second day we visited Tartu Raatuse School, one of the few schools recently receiving a number of refugee students. The teachers here engage in frequent self-evaluations, discuss student progress and course of action, as well as cooperate with other schools from the city to enhance their professional development. Four teachers were recently sent to undertake a special training course on integrating refugee students, funded by the ministry. The collaboration exhibited by both schools has facilitated great communication and knowledge transfer among the teachers, which is especially useful in a country unfamiliar with significant refugee populations and utilizing different didactic resources.

The Tartu visit report can be accessed here: