The NAOS team in front of Platy Secondary 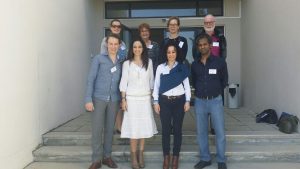 -Nicosia is Cyprus’ largest and most prominent city, as well as the southernmost European capital. It can by definition be characterized a uniquely diverse city, in virtue of its division into Northern Nicosia (the Turkish occupied part of town), and Southern Nicosia (part of the Republic of Cyprus). Cyprus’ proximity to both the Middle East and North Africa has rendered it to be a key crossing-point for vast numbers of asylum seekers and refugees. Similarly to Greece, this unsustainable number of immigrants the last two decades have attracted have come at such an unprecedented pace that large efforts must be made to prevent social exclusion.

-The visiting NAOS partners were Belgium and the Netherlands; the two themes of focus at this visit were social psychology and school-community relationships. On the first day we visited 3rd Lakatameia primary school, one of the schools implementing the newly-promoted Code of Good Behaviour & Diversity Policy. The school has established itself as a non-discriminatory haven, condemning bullying and holding everybody accountable. Despite initial struggles to incorporate all parents and acquire consent and acceptance from everyone on what instances qualify as racism, the school has rapidly moved forward to set a good example for the surrounding area. The second school we got to visit was Platy Secondary School, which has recently introduced numerous policies aimed at assisting immigrant students. These can be religious-oriented (early Fridays for Muslims, non-compulsory attendance to certain events) as well as language-oriented, with various extra math, vocabulary out-of-school lessons and A Greek as a Second Language program. It is worth noting that a number of poor students have also been helped by teachers and the community in financial matters, providing transportation costs for students living far from the school. We believe both schools exemplified commendable integration-emphasized action.

The Nicosia visit report can be accessed here: