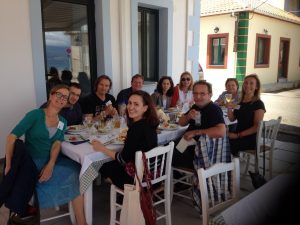 -Patra is a historically prominent Greek city, a few centuries ago infamous as the cosmopolitan center of the Mediterranean region. Though its current fame is a tough match for the glorious past, the city is still the largest in the Peloponnese region, and perhaps the most important in the country’s south-west with an excellent record in scientific and technological education. Due to Greece’s geographical location and Patra’s large port, it is often considered a “gateway/middle city” for many people immigrating to Europe.

–Croatia, Norway, and Netherlands were the visiting partners, with social psychology serving as the overarching NAOS theme throughout our visit. Greece’s highly centralized system following the dissolvement  of civil unrest after the military junta, together with the influx of approximately a million immigrants in the last few decades, has rendered social exclusion and low provision of resources to be a significant issue. The first school we visited, Diakopto Secondary School, seeks to ameliorate relationships between Albanian students and locals; the school organizes anti-xenophobia and anti-prejudice workshops, and has stimulated participation in the Odysseas project, an initiative helping migrant students with their reading skills. The school we got to visit the second day, the 50th Primary School of Patras, only comprised a 10% population of immigrant students, a low ratio which has facilitated easier integration for many of the foreign students. What we thoroughly noticed in the school environment was students’ strong sense of identity and a prevalent air of acceptance. In both schools, we thought maximum effort is exemplified by teachers and headmasters to engage in personal professional improvement and a strong conviction that the lack of resources offered by the state does not necessarily predispose diverse schools to failure if consistent efforts are made for the social inclusion of disadvantaged students.

The Patras visit report can be accessed here: