The NAOS partners in Porto 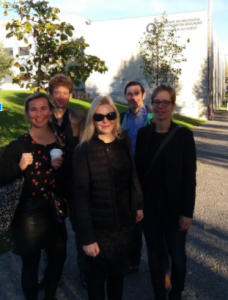 Porto, the second largest city in Portugal, is another coastal city with a prominent “cultural center” past during the Medieval times. Due to its colonial, historic and linguistic ties, Portugal has become an extremely popular country to many immigrants arriving from Brazil, Africa, and even the Ukraine. Also relevant with the schools we visited is a sizable Romani population, which in the case of Porto is secluded in a particular area away from the center.

Estonia and the Netherlands participated in the Porto study visit; the themes of emphasis were school-community relationships and pedagogy. For the past decade, the school network in the country is organized in school clusters which are made up of schools that offer all education levels from pre-school education to secondary education. Clusters serve a number of schools within close-by neighborhoods. We thus got to see a kindergarten & primary and a secondary school from one such cluster, known as the Agrupamento de Escolas do Cercorior (the Cerco Cluster). The area these schools serve has been characterized as extremely poor, with soaring unemployment levels- and as aforementioned, a significant Roma population. Cerco´s School Cluster is part of a programme called Education Territory of Priority Intervention (TEIP), which is associated with most changes/ innovative practices and developments aimed within the neighborhood. TEIP has gone a long way improving the infrastructure of the cluster’s buildings, encouraging participation in short-term as well as long-term projects and partnerships and enabling strong contacts with the entire neighborhood. They have engaged the local health center, appointed teachers to positions where they can actively and directly collaborate with numerous stakeholders, and are in the process of a large effort to include and frequently engage the parents, many of whom have not finished school and have low expectations for their children. Importantly, they have introduced an adaptive/differentiating approach for reaching (and consequently teaching) the Roma population, most often notorious for demotivation and underachievement. It appears that the cluster-school system has enabled superior collaboration, and will hopefully continue to be especially helpful in neglected districts in need for more educational interventions.