The NAOS partners together with the Heldring teachers 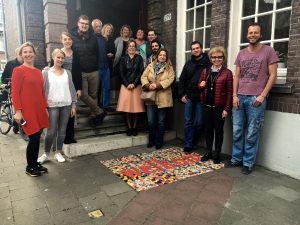 -The fact that Rotterdam has the largest port in Europe, in combination with the superdiversity prevalent in the Netherlands render it unsurprising that the city is a multi-ethnic melting pot, with 48% of the population consisting of people of non-Dutch origin. Although the Netherlands is a pioneer in diversity research, much educational inequity is still conspicuous in certain immigrant-secluded districts, with neighborhoods in Rotterdam South serving as a prominent example.

–Lithuania and Croatia were the participating NAOS partners, and the themes of focus were parental involvement and school-community relationships. The first school we visited was De Hef, a vocational secondary school almost exclusively made up of 1st and 2nd generation immigrant students. In an effort to tackle past safety concerns De Hef has transferred to a completely new building, and has embraced a philosophy characterized by “The Triangle Approach”, seeking to unite and reconcile a)school environment, b) neighborhood environment, and c) home environment. The thought process here is that without the three being appropriately connected as well as cared for by various stakeholders, a student is likely to remain neglected, especially in disadvantaged neighborhoods. De Hef also houses a department for newly-arrived foreign students, acclimating and familiarizing them with Dutch before they can move on to the vocational department. The next day we visited De Heldring, a special education primary school. We were happy to meet teachers united by a special bond, who can turn to each other when faced with challenges on how to reach students or best incorporate the community into their school environment. Principal, teachers and parents establish goals together at the beginning of the academic year, and progress is monitored throughout the year by all sides. The two schools exemplified significant effort in achieving an open-door policy, despite the obvious struggles involved with secluded parents whose work takes up the majority of their time and who often have poor Dutch communication skills.